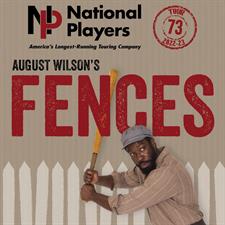 Troy Maxson was a star in the Negro Baseball League, but he was past his prime by the time Jackie Robinson broke the color line in 1947. Now in 1950s Pittsburgh, Troy hauls garbage to provide for his family. When his son Cory wants to play football, Troy worries the same barriers he faced will crush Cory’s dreams, and he’ll crush them first before anyone else does. But Troy’s own mistakes and regrets may be as big a threat to his family’s security as the racism that limited his opportunities. As the past closes in, Troy finds the walls he’s built for protection crumbling. For the first time in its history, National Players takes August Wilson’s most acclaimed drama in his Century Cycle Plays to the stage.

National Players is an entirely self-contained and self-sustaining tour: the ensemble members who act in the plays also serve as the tour’s stagehands, electricians, truck drivers, wardrobe crew, and much more. It is an ensemble of true “theatre-makers” in the fullest sense of the word.

The members of the Younger family dream bigger than the small house where they live on the south side of Chicago in the 1950s. When their deceased father’s insurance money comes through, those dreams might actually become reality. Walter Lee wants to run his own business and earn financial independence, but his sister Beneatha dreams of attending medical school. Meanwhile, their mother Lena wants to move them all to a bigger home in a white neighborhood. What will finally allow the Youngers to move up in the world, and who will have their dreams deferred?

National Players is honored to portray this award-winning drama with a universal story about an African American family dealing with prejudice, history, and a world where everything changes.

Adults $15
Students and Children free with a paying adult

Google Yahoo iCal (Outlook, Apple, or other)
Scroll To Top